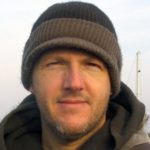 Robin, started off small then got bigger. When he was small, he liked making models (real models - not in a computer), crafting landscapes to put them in, sketching strange worlds, imagining strange craft and creatures that inhabited them.

Now Robin is bigger, he makes models and then crafts and paints the landscapes they inhabit. He is still painting and drawing strange worlds, creatures and craft - but now in a computer. He has concepted, matte painted, modelled, textured, look dev’d, and lit for Film and TV for over 20 years. He has been at DNEG for 10 years initially as an Environments Lead, then becoming a Supervisor and currently running the DNEG TV Env/Gen department, which recently won an EMMY for HBO’s Chernobyl mini-series.

He has concepted on projects such as Total Recall, Hunger Games Catching Fire, Avengers Age of Ultron, Jupiter Ascending, Assassin's Creed, Star Trek Beyond, Pacific Rim Uprising, and TV shows such as The Dark Crystal, and Dr Who: Seasons 11 and 12.