Jahirul Amin|18.05.2020
We now come to the foot. We’ve already created its FK controls, so here we will mainly focus on creating the reverse foot setup for the IK leg 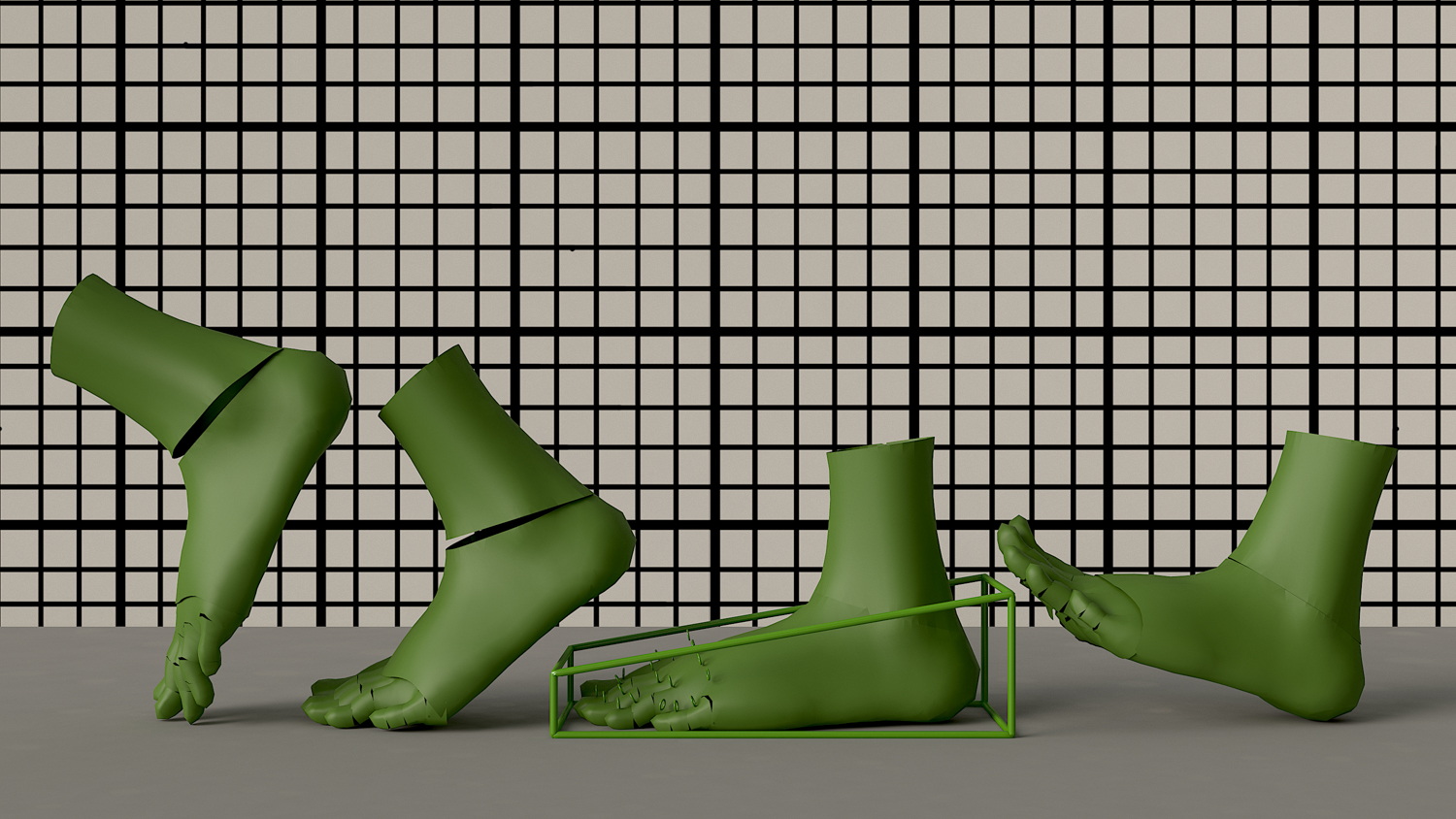 Without the reverse foot setup, it will be pretty tricky for the animator to create the necessary poses for the character to make contact with and push off from the ground. We’ll also introduce some additional joints and controls for the individual toes so the foot does not feel too stiff when animated.

To drive the reverse foot, we will need a series of locators. These locators will be organised in a parent-child hierarchy allowing the IK foot to pivot from different positions. Create the first locator by going Create > Locator and call it l_heel_loc. If it is a bit small, increase the Local Scale in the Channel Box, under SHAPES. We want to position this locator at the back of the foot as well as orient the locator to match the angle of the foot.

First, parent the l_heel_loc under l_ankleTwist_jnt, zero out the translate values and only the value in Rotate Y to match the position and the angle of the foot. We will be duplicating all the other locators from this one so that their orientations will all match the angle of the foot. Do not zero out the value in Rotate X. We want to leave this as it is so positive Y equals up in World space. 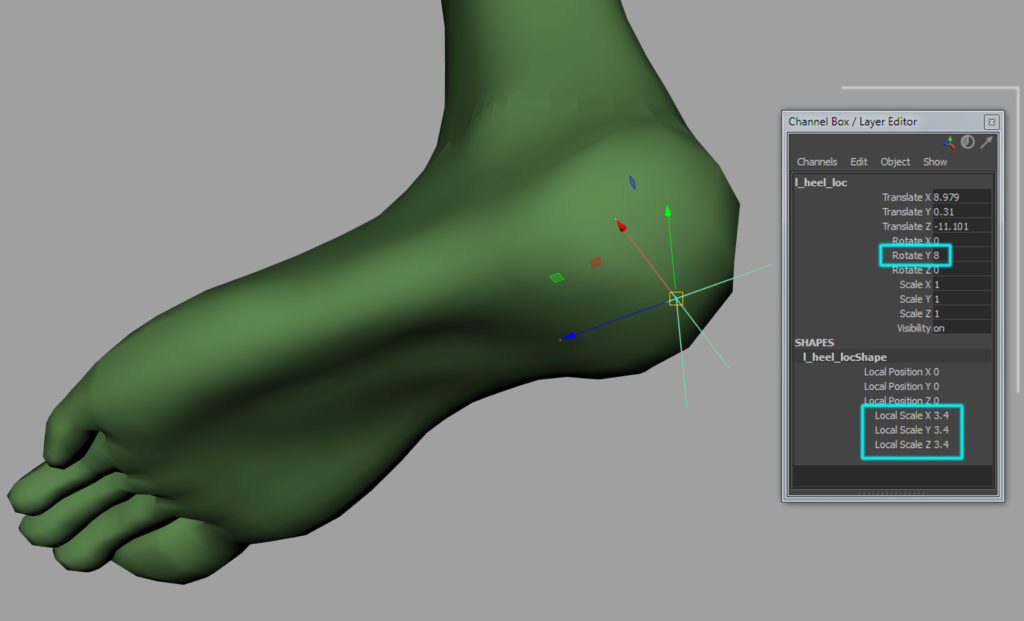 Once you have positioned and orientated the locator correctly, hit Shift + P to un-parent it. Now translate the locator down slightly and towards the heel of the foot. To make it easier, activate Snap to Points (hold down the V key) and snap it to one of the vertices on the back of the foot.

With l_heel_loc selected, hit Ctrl+D to duplicate it and then rename it l_ball_loc. Use Snap to Points to snap it to l_ball_jnt. You may want to hide the geometry to do this so it does not snap to any points on the mesh. Duplicate l_ball_loc and rename the new locator l_toeFlap_loc. Leave this locator in its current position. Now duplicate l_toeFlap_loc and rename it l_toeTip_loc. Use Snap to Points to snap this locator to l_toeTip_jnt. 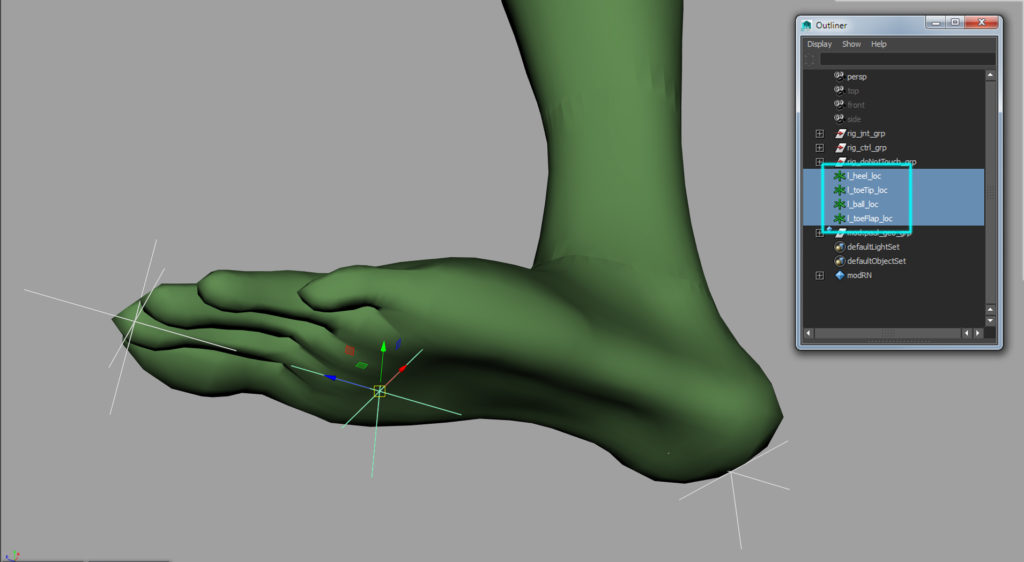 We should now have a total of 6 locators spread around the foot. 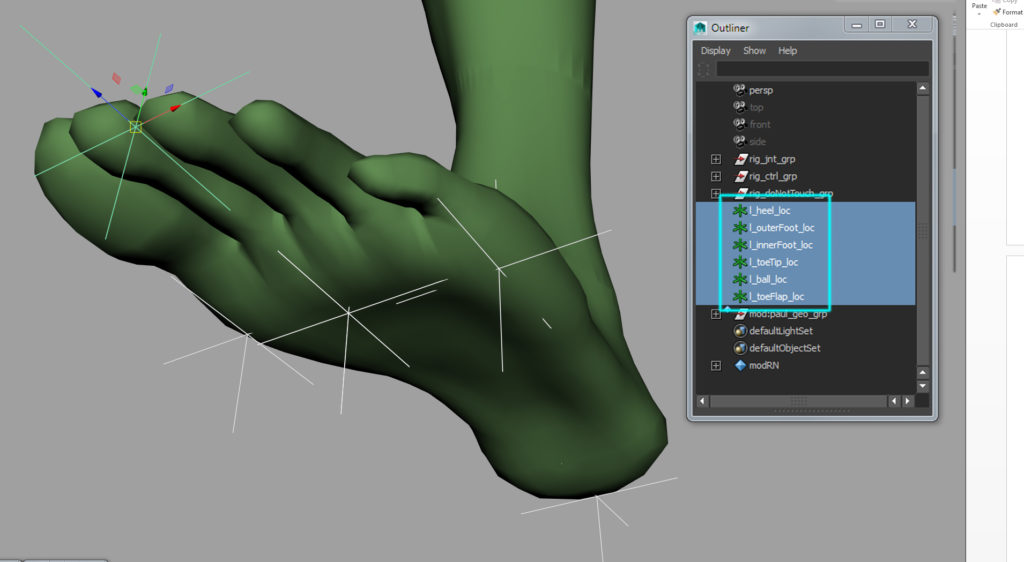 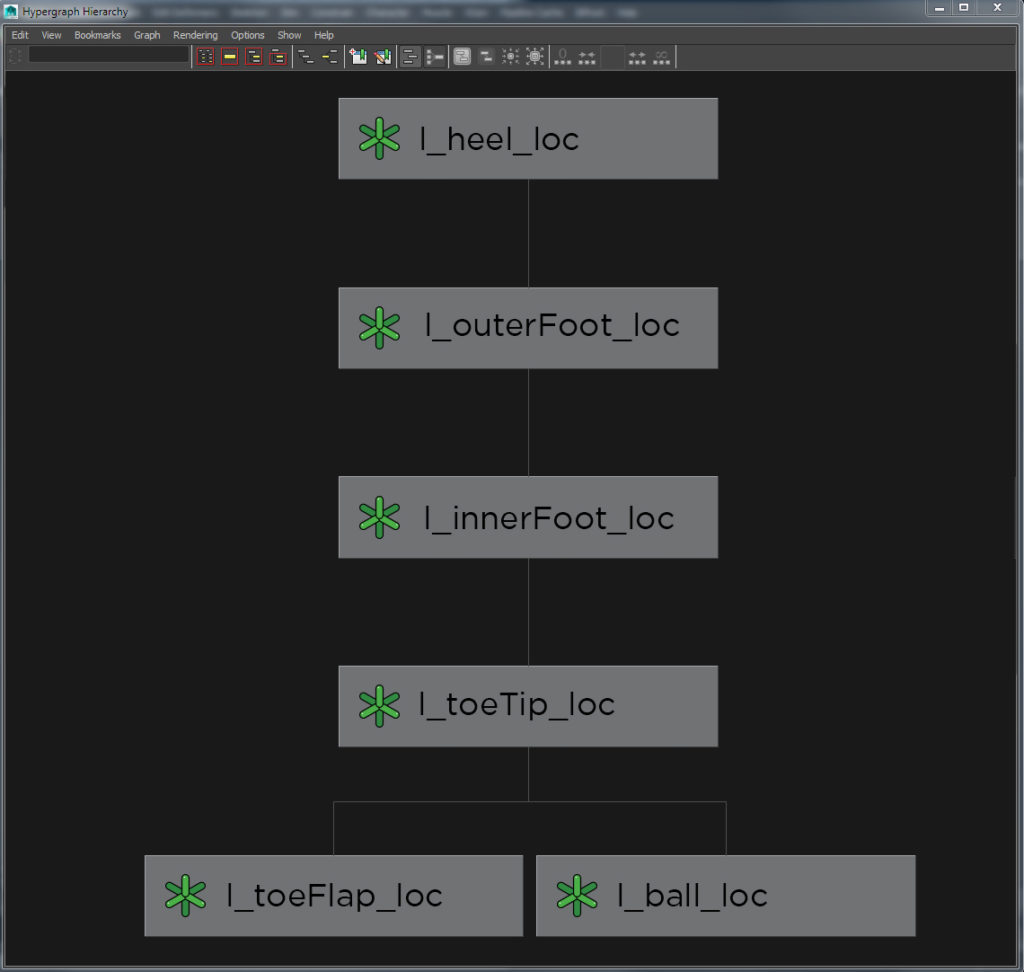 We now need to add some IK handles into the equation. Go Skeleton > IK Handle Tool (Options) and set the Current Solver to Single-Chain Solver. Now click on the l_ankleTwist_ik_jnt and then on the l_ball_ik_jnt. Rename this IK handle l_ball_ik. Now jump back into the IK Handle Tool (press Y to reactivate the last tool) and click on l_ball_ik_jnt, and then on l_toeEnd_ik_jnt. Rename this new IK handle to l_toeTip_ik.

Now it’s time to add the IK handles to our hierarchy for the reverse foot. Select both l_ball_ik and l_toeTip_ik, and parent them under l_toeFlap_loc. Then select l_leg_ik and parent it under l_ball_ik. Rotate the locators to test if the hierarchy has been created correctly and that you can create all the motion needed for a walk cycle and more. 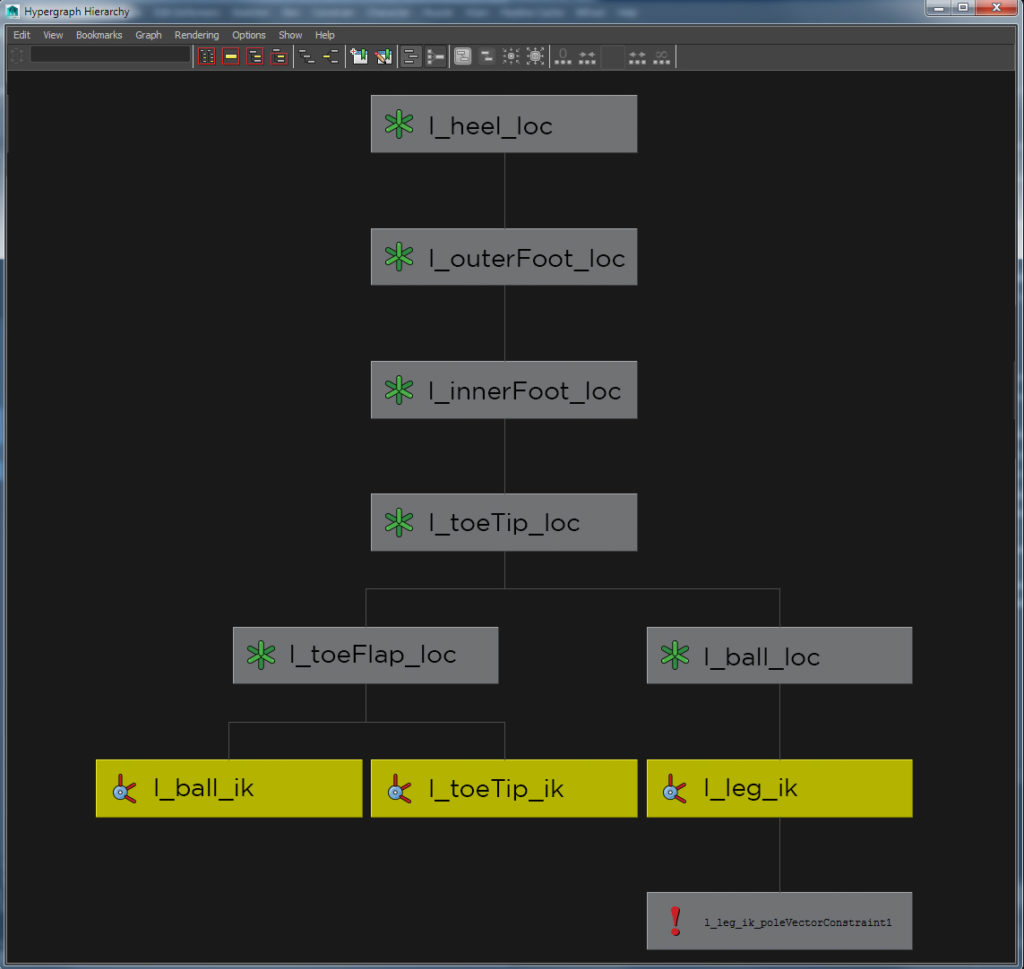 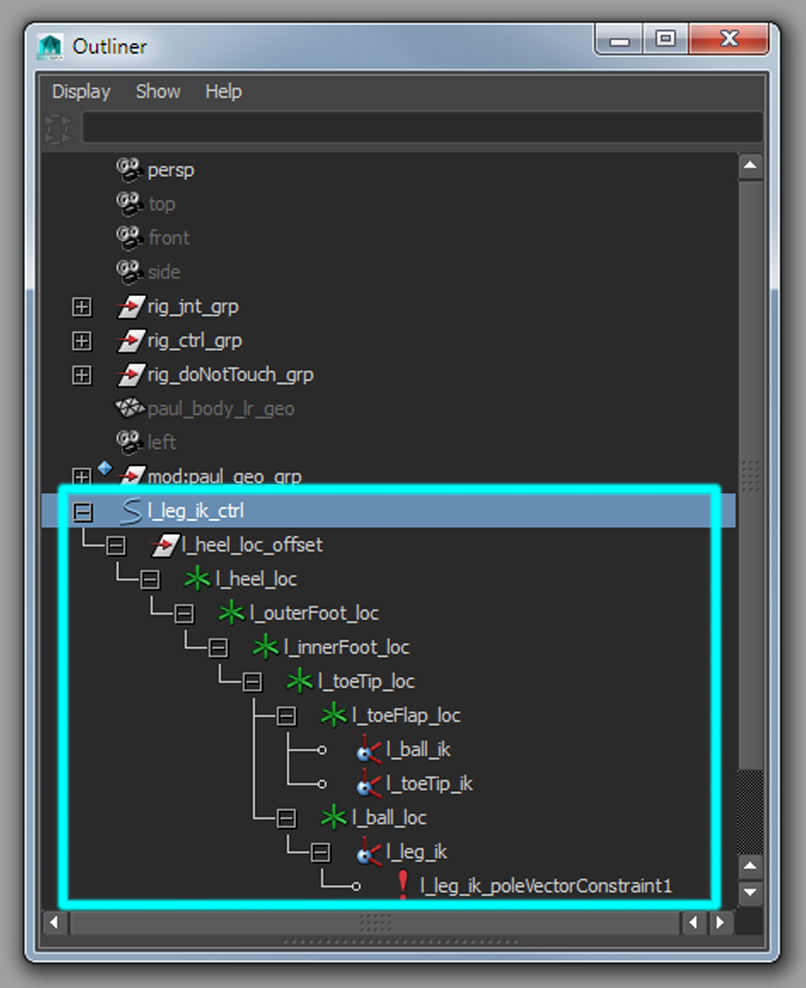 Next, we want to add some custom attributes to drive the reverse foot. Select l_leg_ik_ctrl, go Modify > Add Attribute and add the following:

With our custom attributes created, we’ll next use SDKs to drive the locators.

004. Driving the foot with SDKs

So we’ll start with the footRoll attribute. The footRoll will be the main attribute that we’ll use for animating the walk cycle. With this attribute, we will be able to roll the foot back onto the heel (for the contact pose), then onto the ball of the foot and as the foot prepares to lift off, and then onto the tip toes as it does finally leave the ground. Although we could handle this with multiple controls, I find having them all under one attribute makes it simple for the animator to use and it’s less animation curves to balance and refine. We will however, give the animator the choice to use individual attributes to drive the foot or even add an offset from the main footRoll attribute. This will be handled by the heel, ball and the toeTip attributes.

Open up the SDK window by going Animate > Set Driven Key > Set and load l_leg_ik_ctrl as the Driver object. Then select l_heel_loc, l_ball_loc and l_toeTip_loc, and hit Load Driver. 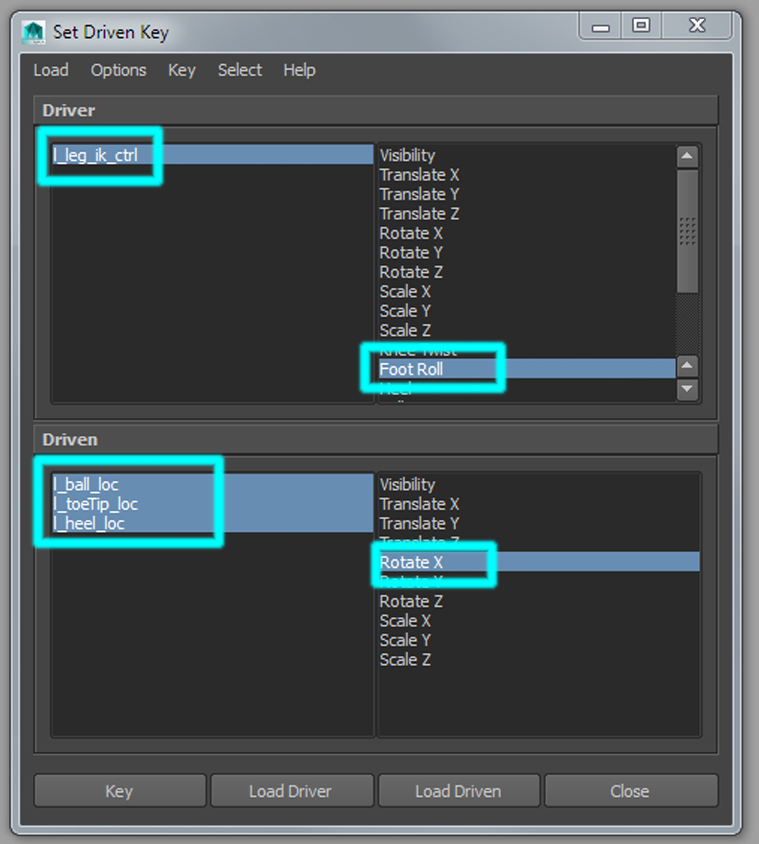 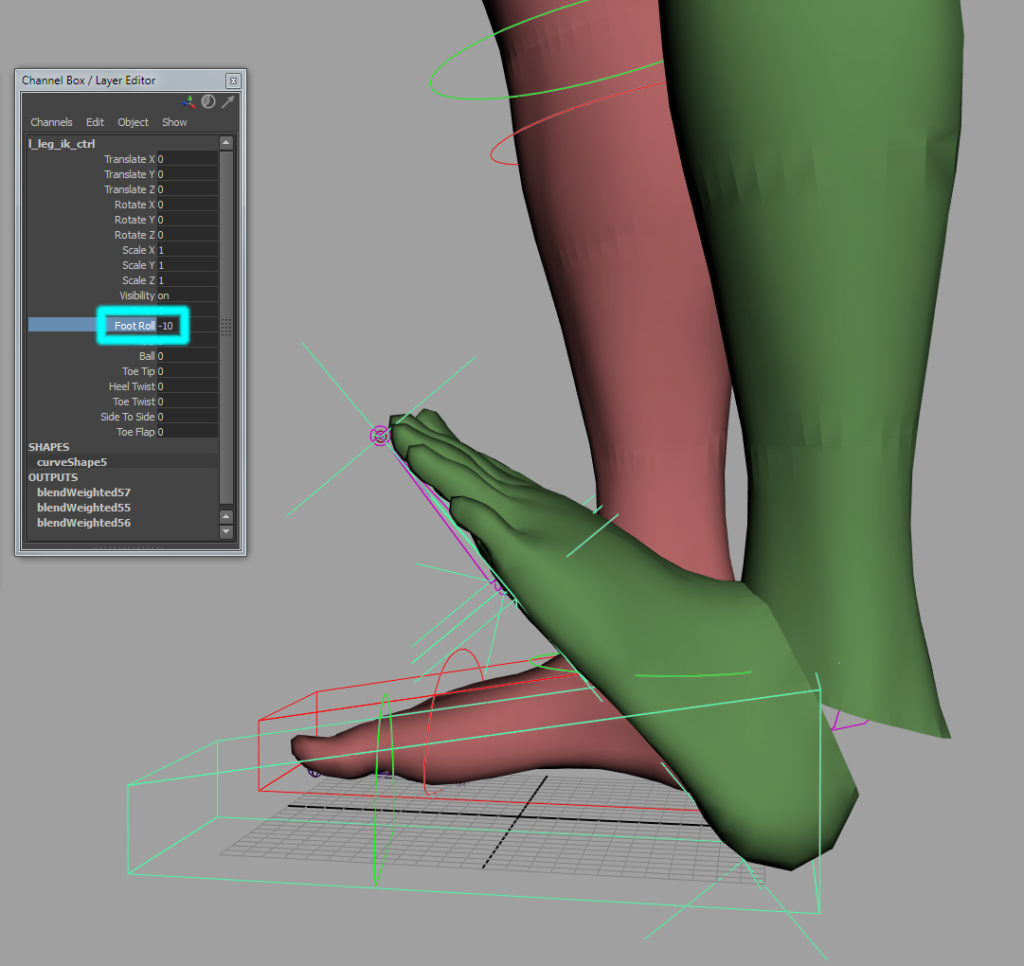 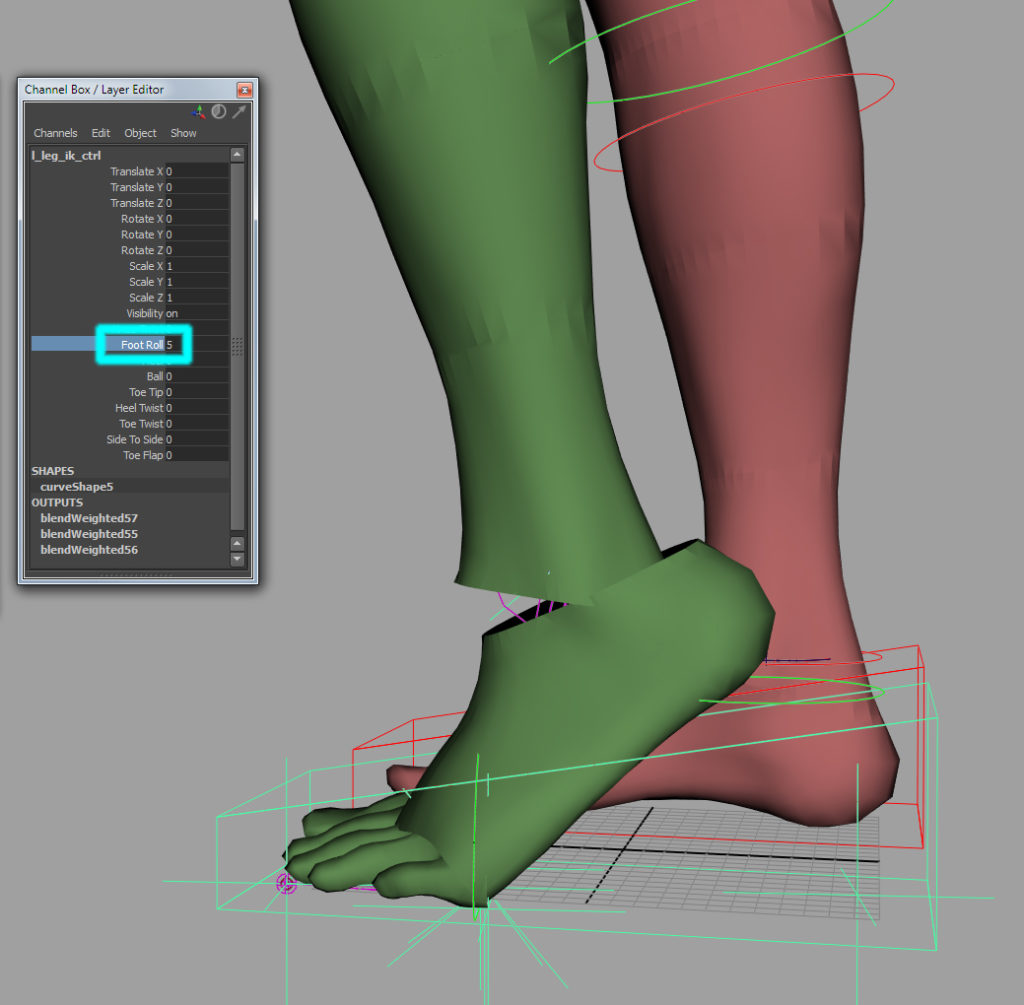 Now set the Foot Roll attribute to 10 and zero out the rotations on the l_ball_loc. Then, set the Rotate X on the l_toeTip_loc to a value of around 70. Highlight all 3 driven objects once more and hit Key on the SDK window. The Foot Roll attribute should now drive the necessary motion needed to plant the foot and for the foot to take off. 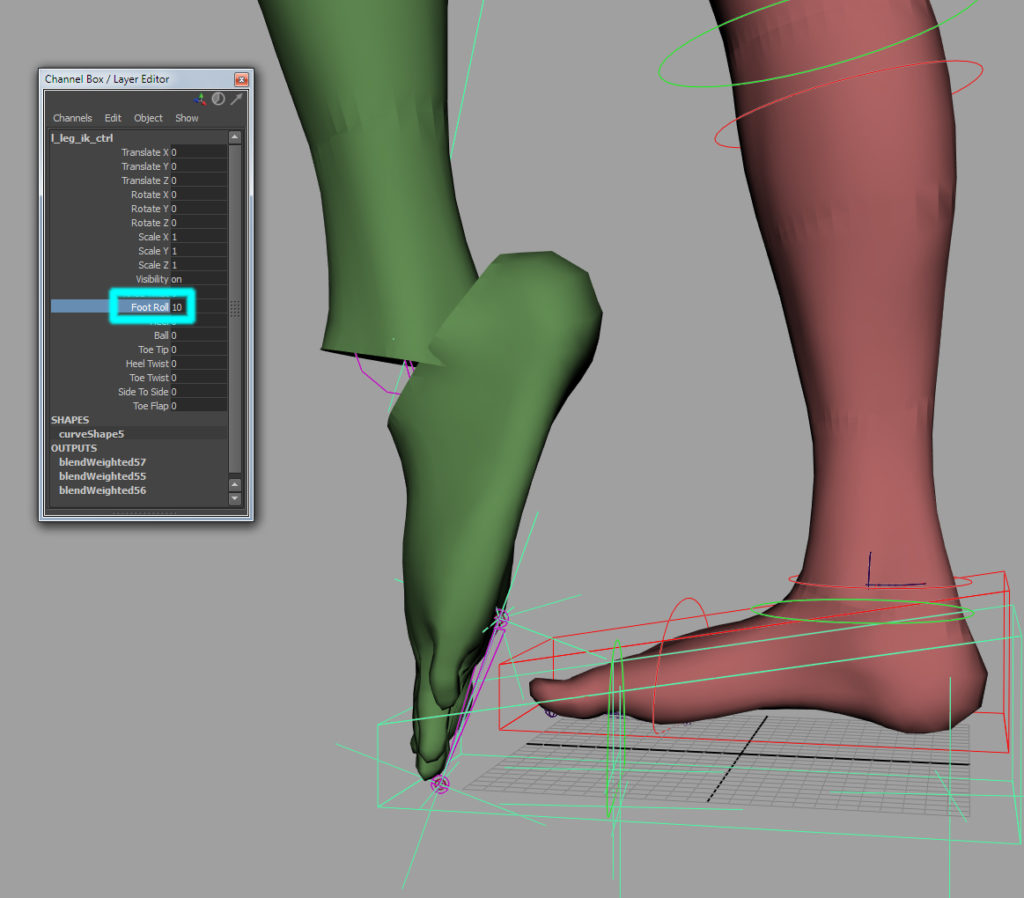 Let’s now tackle the Heel, the Ball and the Toe Tip attribute. These attributes will allow the animator to work on top of the Foot Roll, or use these 3 independent attributes instead of the one. I’ll describe the process for the Heel attribute and leave you to handle the Ball and the Toe Tip. First make sure all the attributes on l_leg_ik_ctrl are set to 0. Then in the SDK window, highlight Heel in the top-right box, highlight l_heel_loc in the bottom-left box and Rotate X in the bottom-right box. With everything in its original pose, hit Key on the SDK window. Now increase the Heel attribute to 10 and use the Rotate X on the l_heel_loc to rotate the foot back onto the heel. I set it Rotate X to -50; this is the same amount as we did using the Foot Roll attribute. Hit Key when ready on the SDK window.

Using the same method, repeat the process for Ball and the Toe Tip attribute.

At this stage, all the attributes for the l_foot_ik_ctrl should now be working. Make sure to test them out. 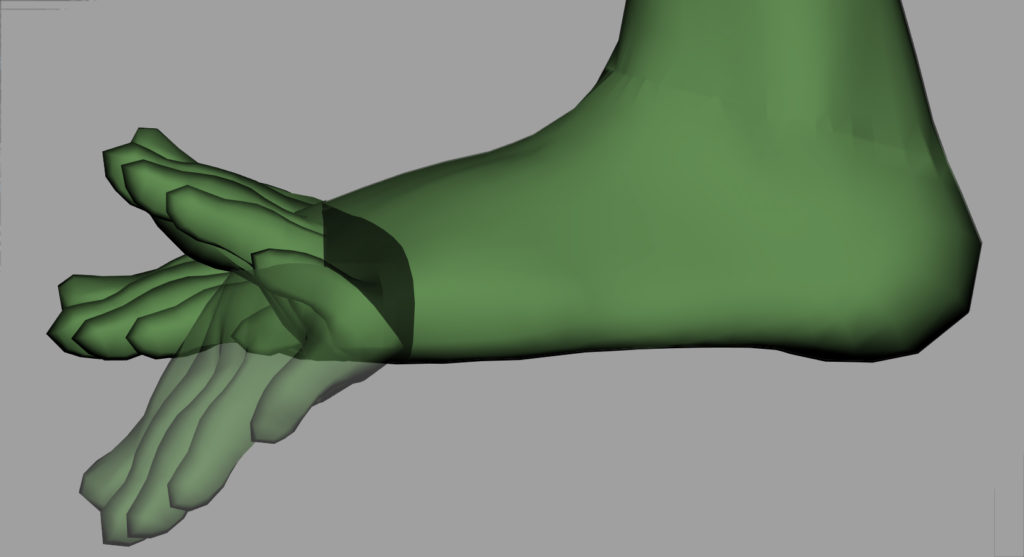 005. Finishing up the knee setup

We are now going to add a feature that will let the animator decide if they would like the knee control to automatically follow the foot control or not. This is one way to reduce knee popping when the leg is raised quite high.

Start by creating a locator (Create > Locator) and rename it l_knee_follow_loc. If you need to increase the size of the locator, remember to use the Local Scale in the Channel Box. Then parent l_kneeFollow_loc under l_leg_ik_ctrl, zero out the translate and rotate attributes in the Channel Box to snap it into place, and then un-parent the locator.

Next, we want the locator to be driven by the foot. Select in this order: l_leg_ik_ctrl, l_knee_follow_loc and go Constrain > Point. Then with the same selection, go Constrain > Orient (Options). In here, set the Constrain Axes to only Y and hit Apply. You can orient constrain the X and Z axes if you wish but I find it causes a bit too much movement to the knee control, especially when you twist the foot from side to side. 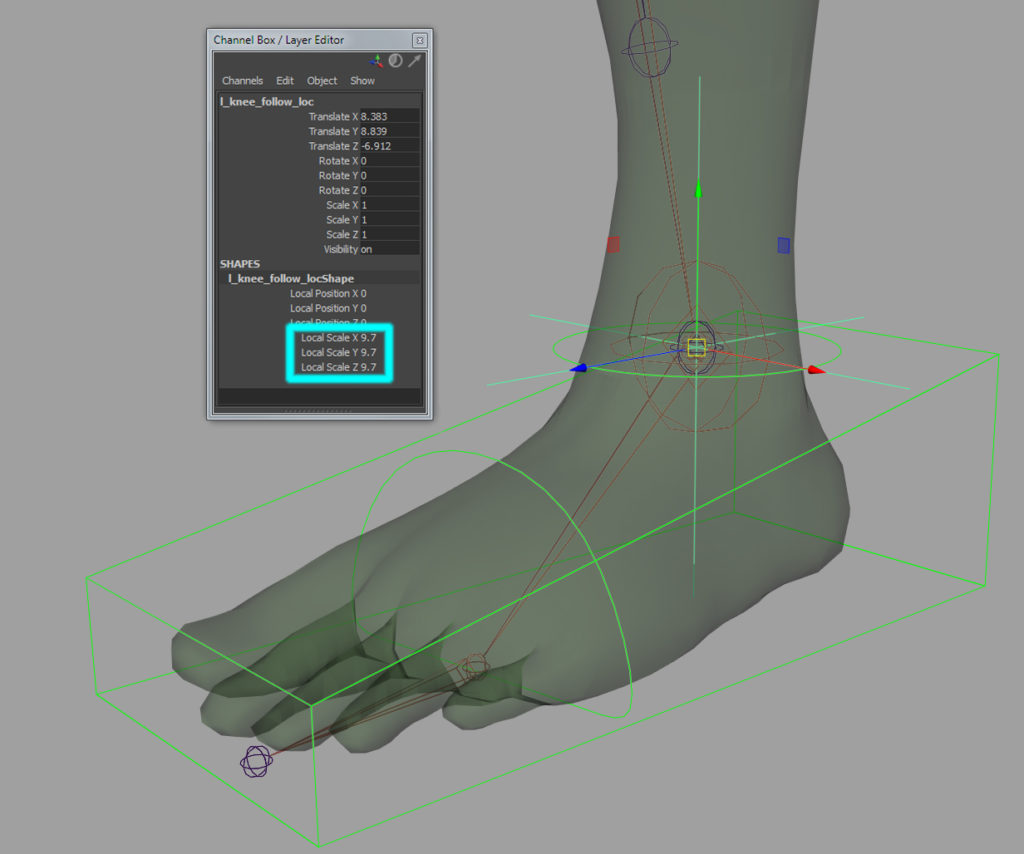 Now we want l_knee_follow_loc to drive the _offset node of our knee control. So, select in this order l_knee_follow_loc, l_knee_ik_ctrl_offset and go Constrain > Parent (Options). This time, make sure you have Maintain Offset enabled and hit Apply. Translating the IK foot control now will carry the knee with it.

We now want add the ability to turn this feature on and off. Let’s add a custom attribute to the knee control to drive enable this. Select l_knee_ik_ctrl and go Modify > Add Attribute. Give it a Long name of kneeFollow. Set the Data Type to Enum and add the following Enum Names: foot and world. 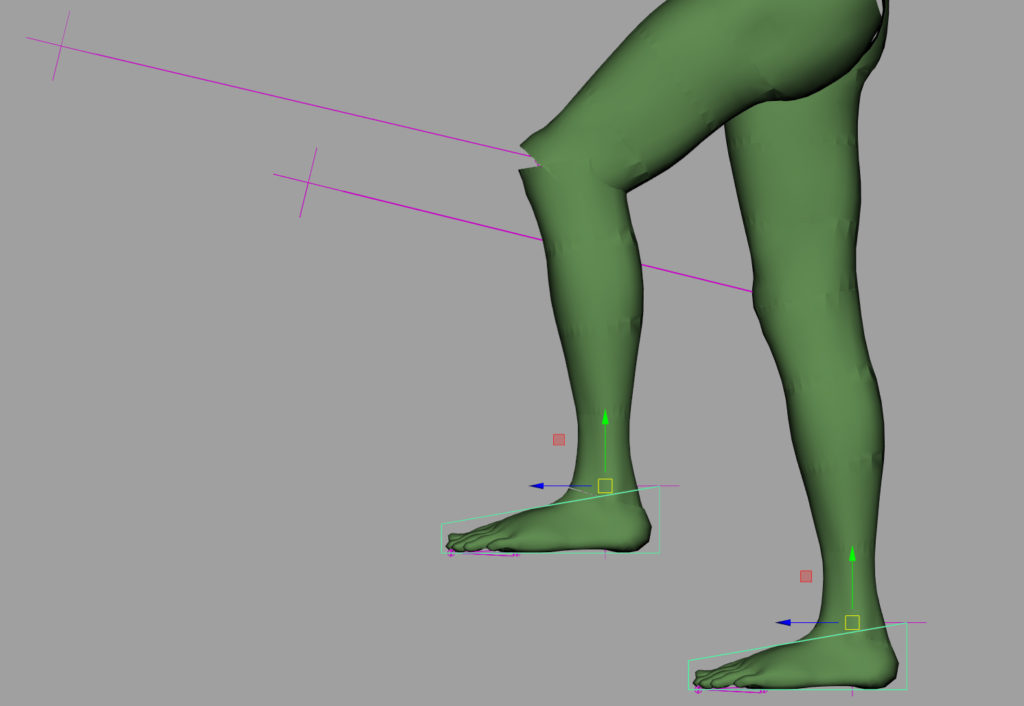 I won’t go into so much detail regarding rigging of the toes as they were handled in much the same way as the fingers. I will, however, give you a brief run-down and then more importantly, go over how I connected the toes up to the rest of the foot.

Starting with the creation of the joints, for each toe, I created a metatarsal joint and then a joint for each phalanx. Using the createControls.py script, I then created a control for each joint (minus the end joints). The controls were then organised in a parent-child relationship so that they would mimic the FK setup of the joints. 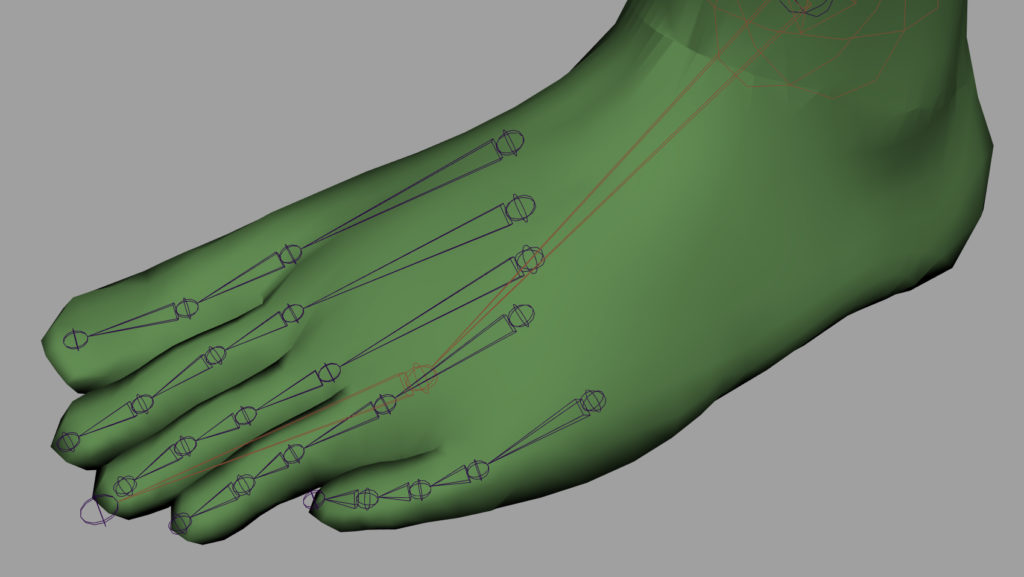 After this, it was a case of connecting the toes to the foot rig. First, all the root joints for each toe were parented under l_ball_jnt. Then it was a case of getting the toes controls to follow both the FK and the IK foot controls. We could simply parent the top node of each control to l_ball_jnt, like we have for the joints, but I’d like keep the joints separate from the controls. So, here is how I went about doing this. First I created an empty group node. To do this, hit Ctrl + G with nothing selected. Call this node l_toes_ctrl. With that node selected, hit Ctrl + G to group it to itself. This will be used as an offset node. Rename this node to l_toes_ctrl_offset. Now take the _offset node, parent it under l_ball_jnt, zero out the Translate and Rotate values to snap it into place, and then hit Shift + P to un-parent it.

Now take all the top nodes for each of the toes controls and parent them under l_toes_ctrl. With all the control hierarchies for the toes now living under a single group, we will simply parent constrain that group to l_ball_jnt. So, select in this order: l_ball_jnt, l_toes_ctrl_offset and go Constrain > Parent. The toes should now follow the foot correctly but do make sure to test it out in both FK and IK mode. Make sure to do this for both legs and then move on to the next stage, which is to do a little spring cleaning. 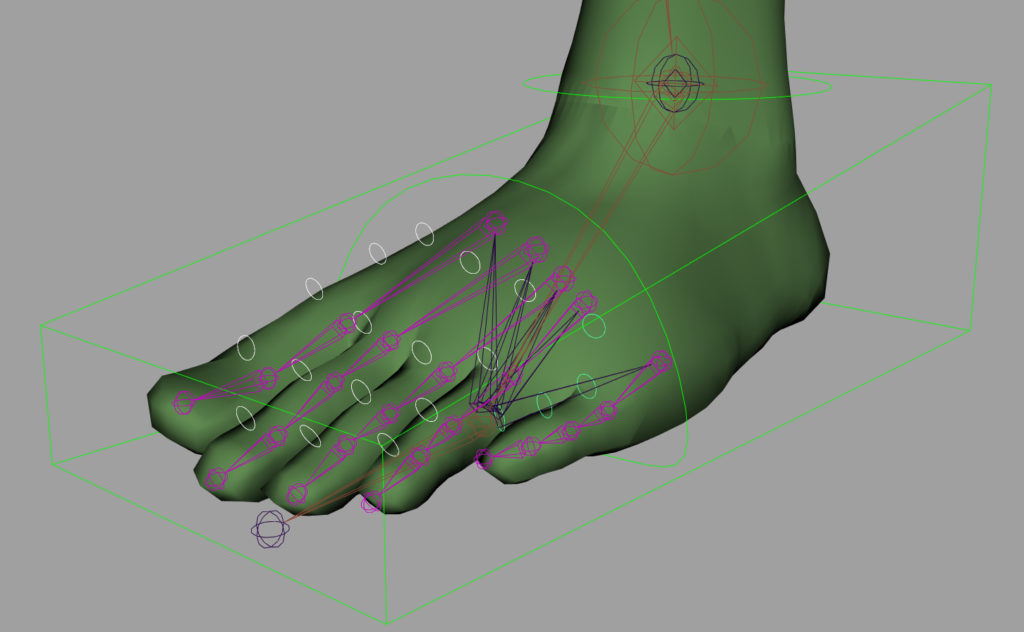 That’s it for the leg. Next, we’ll do some major tidying up to prepare us for the skinning stage. 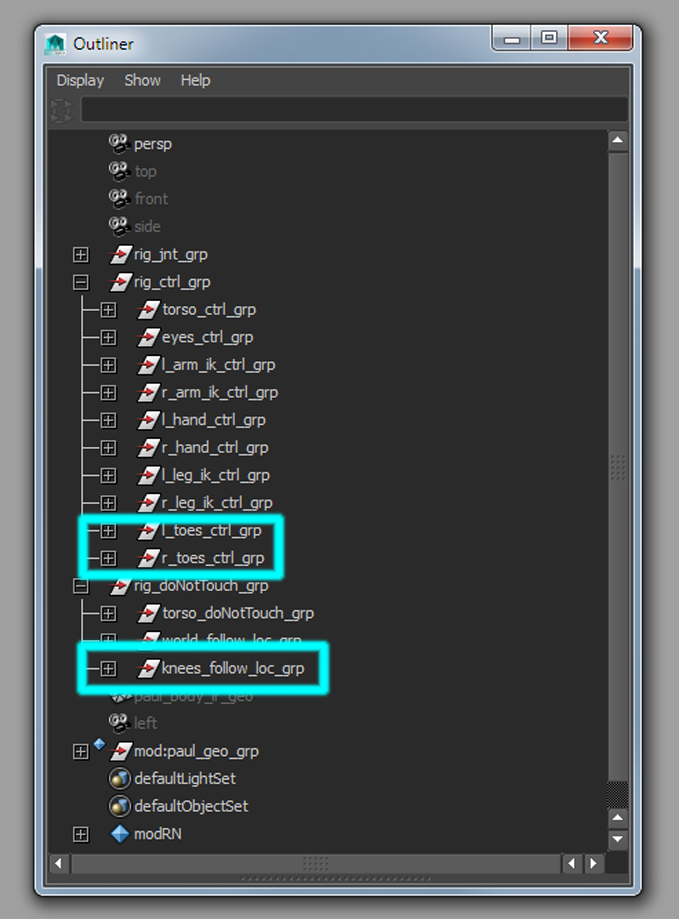