Becoming a Better Artist #1003: Find the Time, Make an Effort, Do it Again

Jahirul Amin|11.09.2022
How do you push the limits of your craft so a bunch of pixels on the screen can take the viewer on a journey? 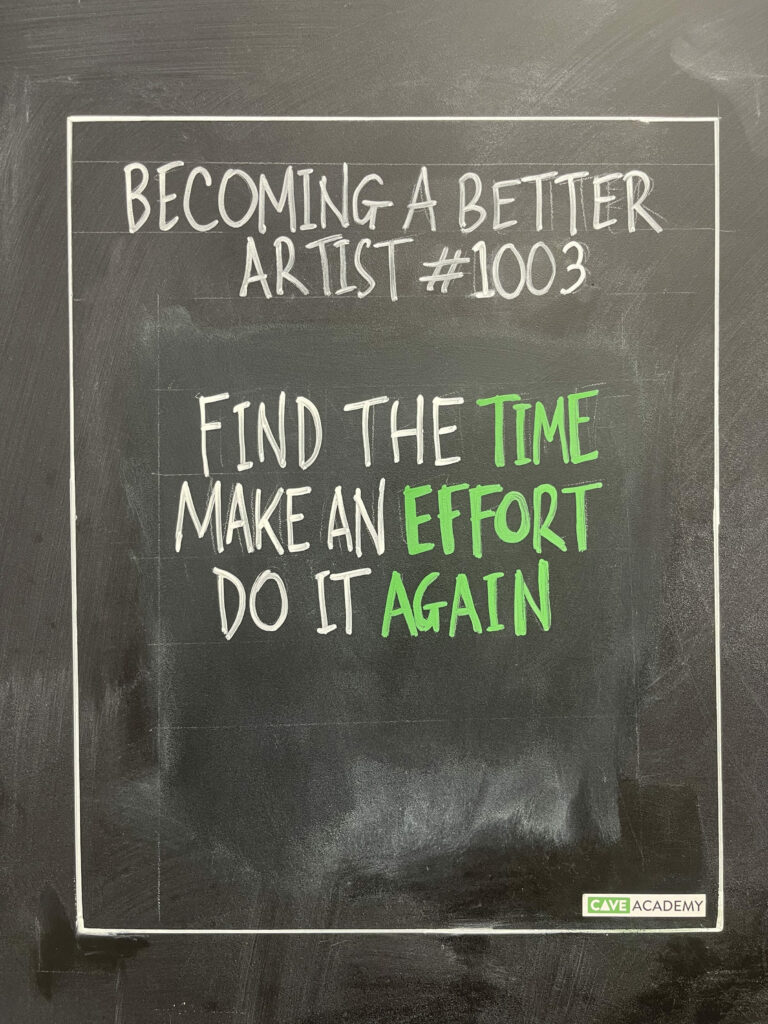 So, you want to be an amazing digital modeller and sculptor. You want people to look at your work and feel the bony landmarks pressing against the surface, the muscles in action, the skin being affected by the gravity that weighs down on all of us.

Or you want to create the most realistic FX work ever. You don’t want viewers to know that what they just witnessed was your work. You just want them so engrossed in the story and fooled by your work that they don’t even question it. Maybe later, they’ll see a VFX breakdown, and the reality of your work will hit them. They’ll be blown away.

Or maybe you’ve created a photorealistic render. It flicks up on someone’s screen and they think it is a cinematic shot. They tell themselves that it “looks like the work of Roger Deakins.” They are so engrossed in the image, the framing, the lighting, the story, that they do not realise that they are looking at a CG render.

So how do you elevate your work to this level? How do you push the limits of your craft so a bunch of pixels can make the audience want to touch the screen, or maybe so they strike a chord on an emotional level. How do you take the viewer on a journey?

This might not be the right answer, but if someone asked me that question, I’d say:

DO IT AGAIN…AND AGAIN

That’s it. Very simple when you think about it. Simple but not easy.

A great way to improve your work is to iterate and get feedback on each version. For example, here are a series of feedback sessions from CAVE Academy Dailies, where each week Ryan Prendergast was provided with professional feedback from industry experts:

It is crucial to study the work of others; artists have been doing that since the dawn of art. Examining the work of your peers, their approach, their ideas, are all valid ways to learn and consider how you could approach your own work. However, when it comes to it, there is no substitute for getting your hands dirty and trying things out yourself.

Time is precious. Use it wisely.

As clichéd as it sounds, there is truth to it.

We are surrounded by more art than ever before. We no longer need to head to a gallery or museum to see art (although I highly recommend doing so). At our fingertips, we have endless amounts of art we can view, zoom in on, deconstruct, and learn from. But again, how are you spending your time? Are you doing just that? Spending countless hours looking at the work of others? Because looking and doing are two separate things. I could watch Serena Williams, one of the greatest tennis players of all time, play tennis for years. But in doing so, could I do what she does? Probably not. But if I put in the same amount of time and effort as Serena, then maybe I’d have a shot.

Maybe some people do have a bit of natural talent. Maybe their bodies are built for running, for swimming, or for holding a pencil. But having a bit of useful DNA will only get you so far. No way did Da Vinci become a master draughtsman by simply looking at other people draw. And I’m sure Michelangelo did not find a piece of stone and the first time he started chipping away at it, out popped David.

The greatest artists, whether that be in sport, or in the arts, or in science, in maths, all put in the time and the effort. Maybe it took them a week, or maybe a year, or maybe even a decade to gain their skills, who knows. However long it took, they complemented time with effort. They got up early, they did an extra practice run, they stayed up late to have one more crack at things. And I bet you, that as good as they got, they did not rest on their laurels. They kept training, kept learning, kept pushing.

And did things always go to plan for such artists? No, probably not.

So, what did they all have in common? What is it that they have or did that we don’t see? I’m guessing they all followed a pattern which goes something like this:

Try, fail and get back up again.

But in order to try, you need to FIND THE TIME and MAKE AN EFFORT, and if you fail (in your own eyes), don’t be disheartened, get back up and DO IT AGAIN.

After a bad game, a bad sketch, or a bad crack in the stone, the greats did not put their tools down. They learnt from their mistakes, got back up and went at it again. FIND THE TIME, MAKE AN EFFORT, DO IT AGAIN…AND AGAIN.