Jahirul Amin|25.09.2022
In this document, we'll look at how an element will flow through the pipeline and the statuses we'll attach onto the element. 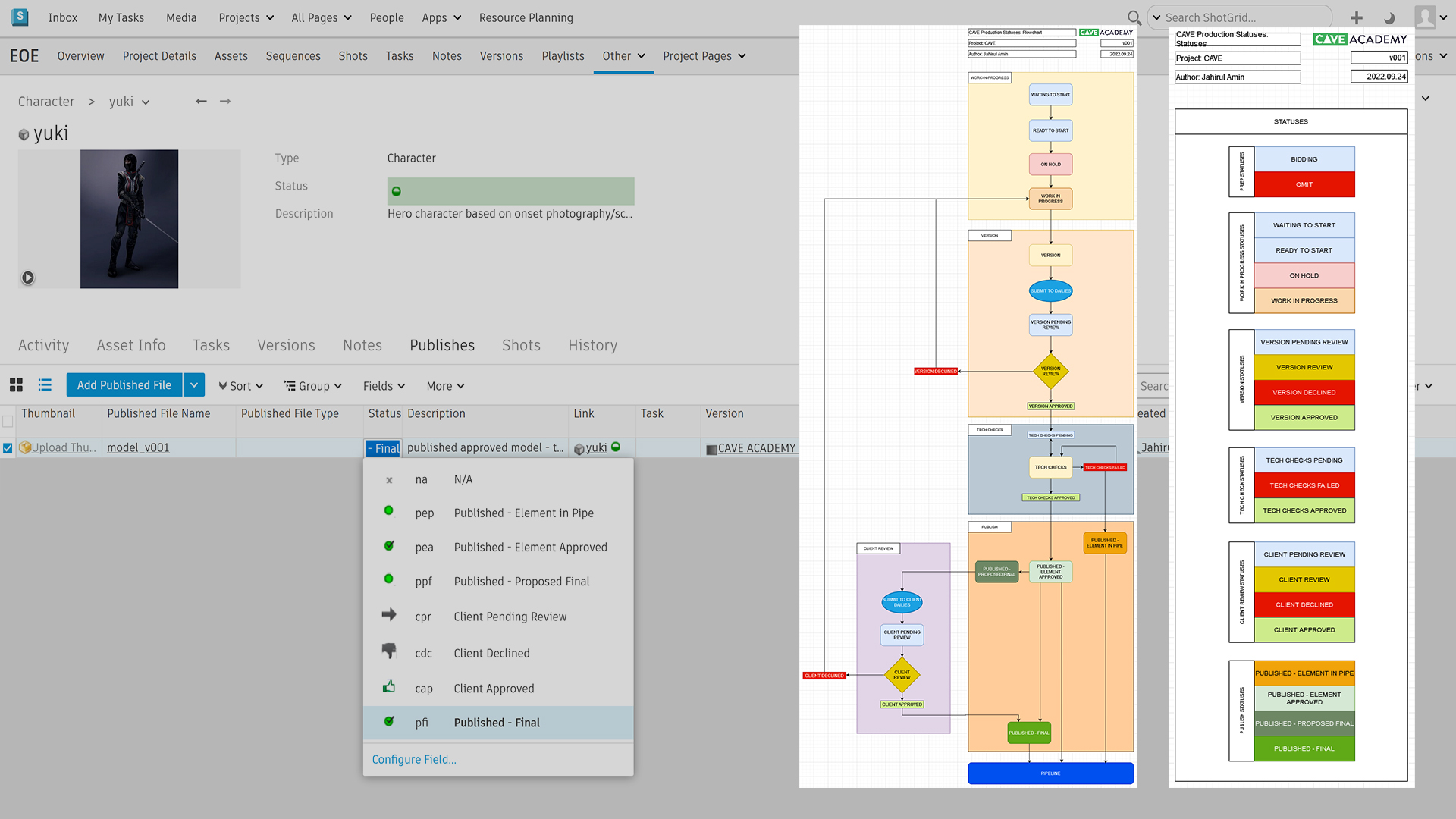 If you are looking to make any tweaks, you can download a zip file containing the flowchart here:

In order to track each element through a production, we’ll be using the statuses listed below. To give some context to WIP, version and published files, here is a quick summary of how we’ll be dealing with the data:

…and for more information on the topic, please take a look at the following doc:

This is the full set of Statuses we’ll be using throughout the lifecycle of an element. They will be used in applications such as ShotGrid or FTrack to manage and inform the team of the current status of an element.

We’ve broken the statuses down into the following groups:

Here is a short summary for each status:

This flowchart gives a breakdown of the different stages of an element and how we go from WIP to PUBLISHED – FINAL. For certain departments, we may need to introduce additional steps but we’ll see how we go for now.

In ShotGrid, it is possible to change and configure the status of an element at the following points:

We’ll be looking to sync specific statuses across the points.  For example, when FINAL is triggered at an Asset/Shot level, this should trigger PUBLISHED – FINAL for the Discipline and Publish Status of an element. 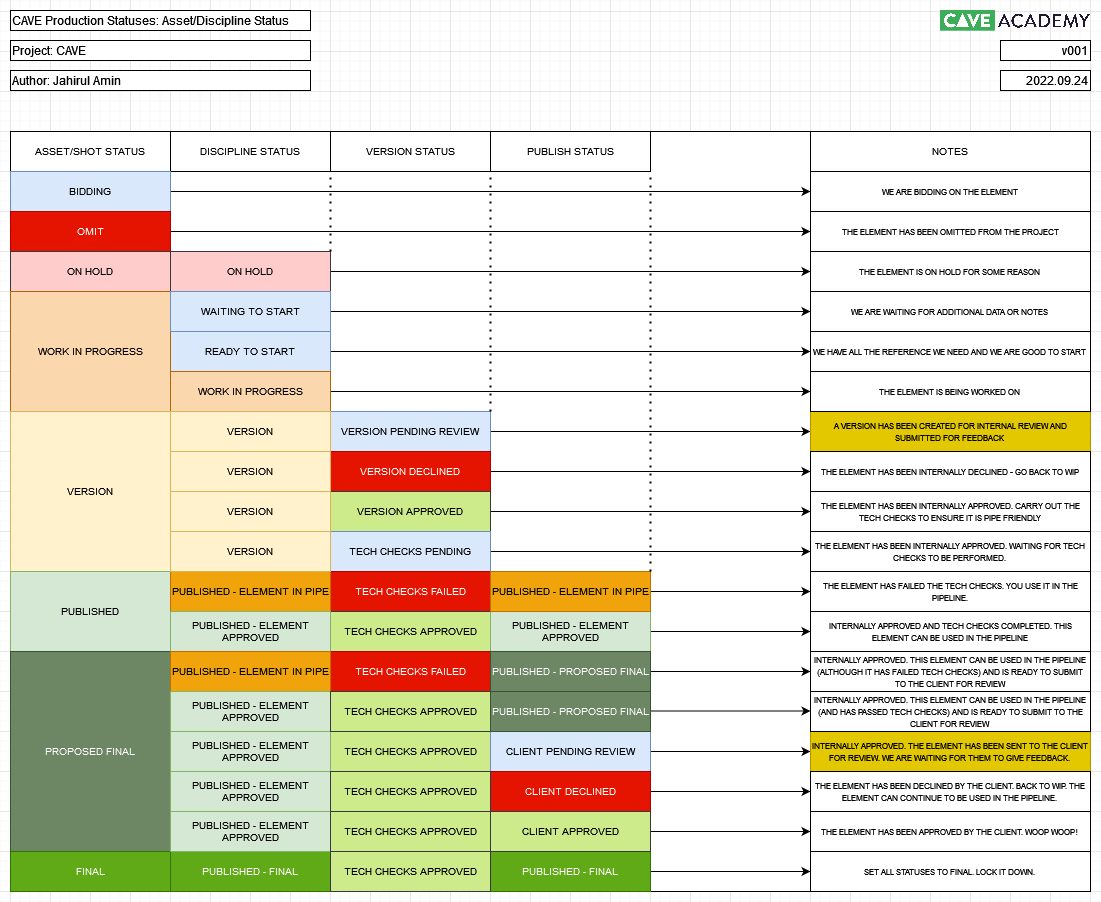 The Asset/Shot stage is what we’ll be presenting to the client. These are the top-level statuses. The data we’ll be sending to clients will be pretty much completed assets or shots (or what we consider to be close to final). For example, we won’t be sending them an animation blocking file or a model blocking file. On some occasions, the client may want to be more hands-on and see things at an earlier stage, and if so, we can tweak our workflow.

These statuses are per Discipline (for example, how is the Model doing, or how are we when it comes to Layout). We’ll be using these statuses to inform others of where the element is in the creation process.

These statuses are on a per element basis. They’ll describe primarily if a version has passed an internal Dailies session and if it does, then how is it doing regarding the Tech Checks. 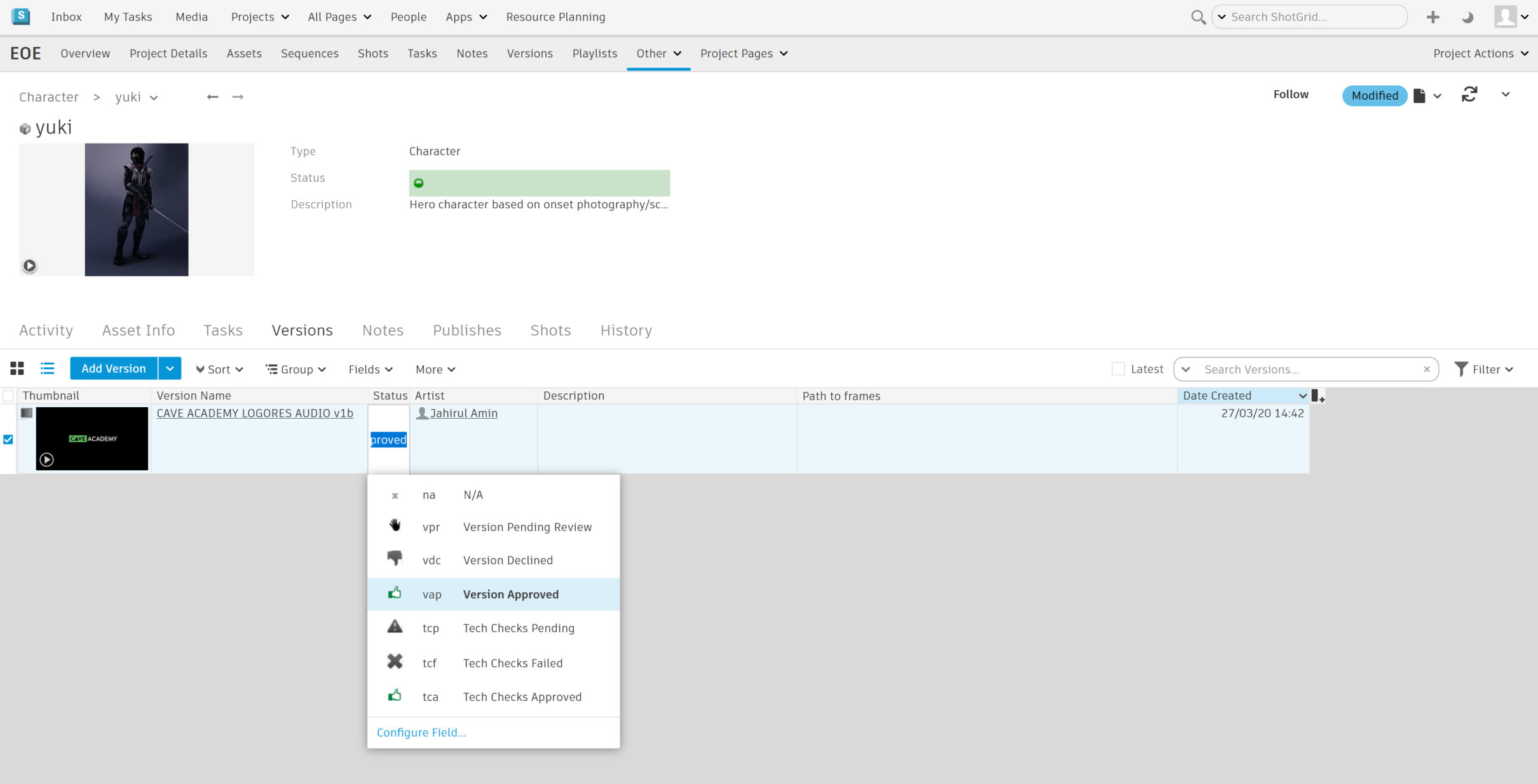 A version that has been approved internally can then be referenced to the Publish file. We’ll only have one publish file per element. These statuses will inform others that they can pick the asset up and if the element has passed Tech Checks. These statuses should sync up with the Discipline statuses, so we can easily see the status for each Discipline from the main Asset/Shot ShotGrid page. 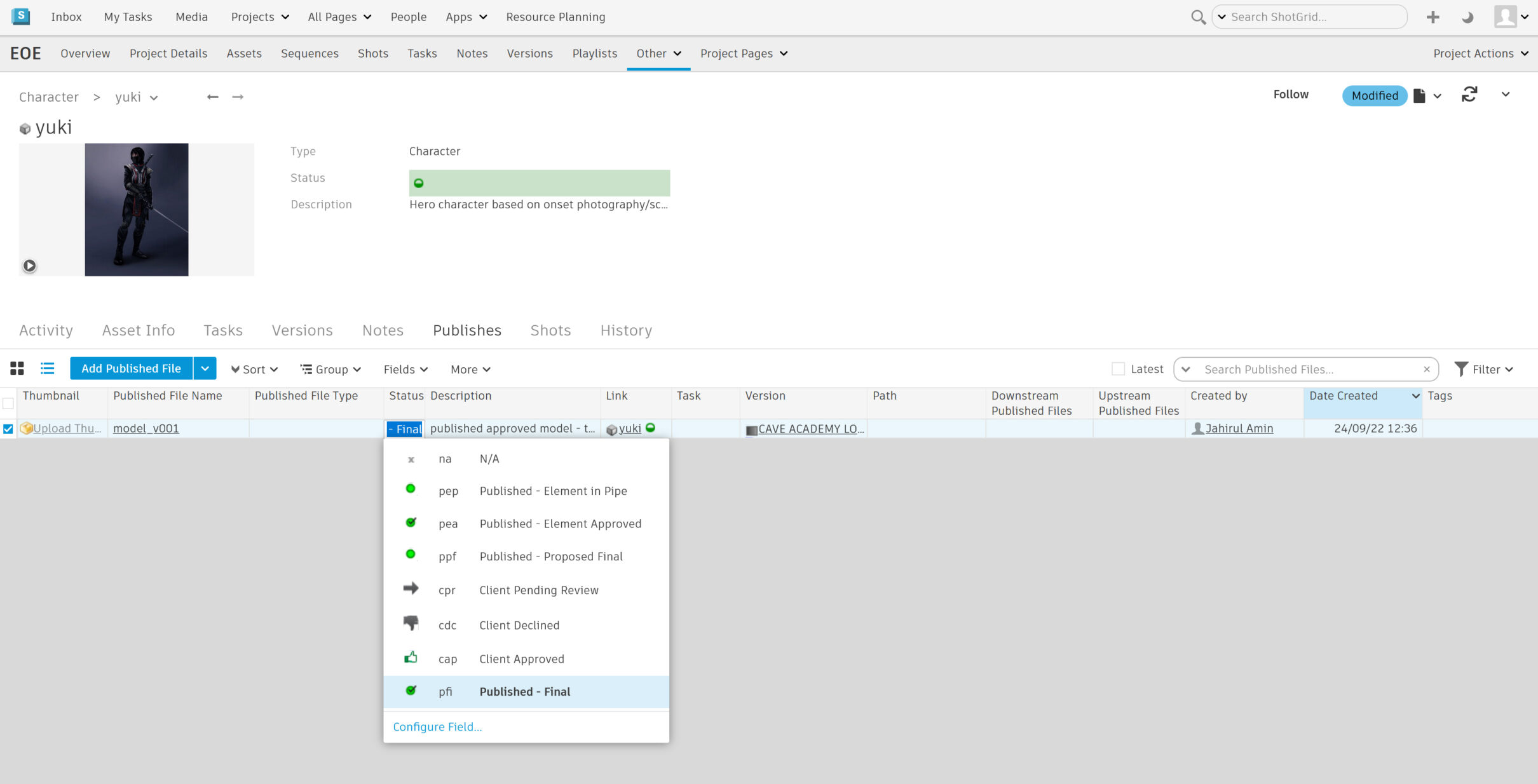 Taking the above notes, here is the workflow for a model passing through production. In this example, v001 successfully makes it through to PUBLISHED – FINAL – which would more than likely never happen.

And here is an example of the journey of an animation element. This time, v001 failed to be approved internally, so a v002 was created and passed through. Again, we’d expect more back and forth, especially when the client gets involved, so this is an extremely simplified journey. Please note that we’ve not added stages such as ‘Blocking’ as we expect such stages to be done as the norm as part of the genenral submission.

For more information on all things Production related, you can check out our courses here:

If you are a fan of mixing science with art, or maths with creative thinking, then join our Connection Programme, where we’ll be exploring VFX, animation and games from the core fundamentals: